UNHCR and the Organising Committee of Rio 2016 Olympic Games on Tuesday selected a 12-year-old Syrian refugee to run with Olympic Torch.

United Nation: The UN Refugee Agency (UNHCR) and the Organising Committee of the Rio 2016 Olympic Games on Tuesday selected a 12-year-old Syrian refugee, Hanan Dacka, to run with the Olympic Torch in the Brazilian capital Brasilia, a UN spokesman said. “The UNHCR said in a statement that with the number of people displaced by conflict and persecution at highest levels in the post-World War II era, Hanan’s carrying of the Olympic torch through Brasilia is about solidarity with refugees everywhere,” Xinhua quoted UN spokesman Stephane Dujarric as saying.

Hanan, who arrived in Brazil in February 2015, lives with her family in Sao Paulo, speaks fluent Portuguese and has many Brazilian friends, the spokesman noted. “The Brazilian leg of the Olympic Torch relay started today (Tuesday) and will last close to 90 days, concluding with the inauguration ceremony on August 5 in the Maracana Stadium, where the Olympic pyre will be lit,” he said.

The Olympic flame has arrived in Brazil for the start of a torch relay that will culminate with the opening of the Olympic Games in Rio in August. It was flown inside a small lantern on a special flight from the Swiss city of Geneva to Brasilia. The torch will pass through more than 300 towns and cities in the Latin American country from the Amazon to Brazil’s southern border, arriving at the Maracana Stadium in Rio on August 5. 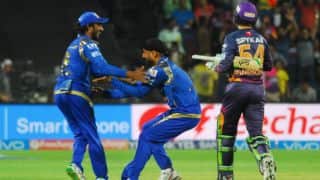