World Championships are the final qualifying competition for the Rio Games to be held from August 5-21. Only three weight categories of 51 kg, 60 kg and 75 kg are part of the women’s boxing competitions at the Olympics. An entry into the semi-finals not only assures the boxer of a medal but also a berth for the Olympics.

However, one more Indian pugilist — Pooja Rani (75 kg) — is still in contention in the World Championships and will be eying a berth for the Olympics. The feature of both the losses suffered by the Indians was that they lost to younger opponents.

Mary Kom had earlier said that she will quit the sport post the 2016 Olympics and with the loss, it could be the end of an illustrious career. Mary’s state-mate Sarita, 31, will also find it difficult to qualify for the 2020 Olympics — which is a far-fetched dream at the moment. During the bout, London Olympics bronze medallist Mary started off positively but 25-year-old Azize played a tactical bout of strong defence and made the most of limited opportunities.

The 2014 Asian Games champion attacked Azize but Azize was able to keep her at a distance and didn’t allow herself to be in a position to concede too many. The young German managed to be successful in her tactics despite a fiesty Mary upping the ante in the final moments.

With the loss, the hopes of Mary, mother of three from Manipur, to qualify for the Games fizzled out. Azize will next be up against top seed Davide Marzia of Italy, who got the better of Hungary’s Katalin Ancsin. In the other bout, 31-year-old Sarita was outboxed and outpunched by 25-year-old Victoria, who looked sharper within the ring.

Both waited for each other to open up but that didn’t happen but the sharp reflexes of the Mexican gave her dominance as she ran away with a 3-0 triumph. 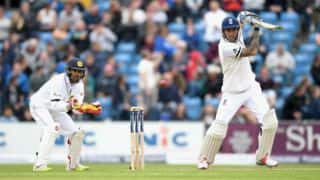 James Anderson: Knocks from Jonny Bairstow and Alex Hales were crucial and deserve lot of credit