Amir Khan added he is a proud British fighter.

Islamabad: Boxer Amir Khan has denied betraying his British upbringing after being criticised for saying he would represent Pakistan at the Rio Games, insisting he only wanted to boost the sport in his parents’ country of birth. But the Bolton-born fighter also admitted he would not be willing to face an accompanying two-year ban from the World Boxing Council that would jeopardise his professional career, making an Olympic appearance unlikely. Speaking to AFP in an exclusive interview in Islamabad, where he launched his first boxing academy on Saturday, Khan said he was a “proud British fighter” who had represented his country at the Athens Games and would therefore not want to deprive fellow Brits of a ticket to Rio De Janeiro.

“I’m not doing it because I’m not happy being British. I’m a proud British fighter, but it’s the way people took it out of context and calling me a traitor — I meant it in a way that I’d rather give someone else an opportunity instead because Pakistan has no boxers,” he said. “But, you know, at the moment we are just waiting and seeing. I don’t think I’ll be allowed to do that anyway because obviously, the WBC, they won’t allow it.”

World Boxing Council president Mauricio Sulaiman denounced a rule change by the International Boxing Association (AIBA) to allow professionals to compete against top amateurs in the Olympics, calling the move dangerous. Amir’s announcement was also met with consternation by some fans on social media and his former promoter Frank Warren, who wrote on boxingscene.com he was “a little disappointed” in Khan, who rose to fame after bagging an Olympic silver medal in 2004.

The 29-year-old stands at a critical juncture in his career following a stinging loss to Saul “Canelo” Alvarez last month, that took his career record to 31 wins and four losses. Khan, a two-time former welterweight world champion, stepped up two divisions to fight his brawny middleweight opponent after he was denied a coveted matchup with Floyd Mayweather, who retired last year. He got off to a lightning start, but after dominating the early rounds was caught with a powerful overhand right that put him on the canvas in the sixth.

Looking more trim than he appeared during the Nevada bout, Khan was sanguine about his loss and insisted he was looking forward to his next world title shot against WBC welterweight champion Danny Garcia. “I feel great. I feel young, fresh. I mean, the Alvarez fight, everything was going fine until I got caught with the big shot and that’s boxing for you sometimes. One punch can change the fight. You can be winning the fight quite comfortably and I’ve seen it happen to the best of us. So, I’m gonna go back to the drawing board and not make those mistakes. I know that my offense was amazing in that fight. But maybe tighten up a few little areas.”

No longer the brash youngster who was known for his fast cars and flashy lifestyle and who regularly made headlines for his speeding tickets, Khan now speaks passionately about the need to give back to those less fortunate — a trait he says he learned from his idol, the late Muhammad Ali. Last year, he travelled to the Greek island of Lesbos to lead a charitable drive for Syrian refugees, while his current trip to Pakistan has seen him raise money and pledge wells for the residents of Thar, a drought-ridden southern district home to some of the country’s most destitute people.

Ali, he says, was “not just a champion but a people’s champion and that’s how I want to be.” His academy in Islamabad — modelled after the one he founded in Bolton, northwest England, will aim to seek out talent in a country which only boasts sporadic success in cricket. He said: “I really believe in the country, I really believe in the talent we have here, just like I did in the UK. I believed in talent in the UK and I produced amateur world champions and European champions and gold medallists and national champions. I want do the same for Pakistan.” 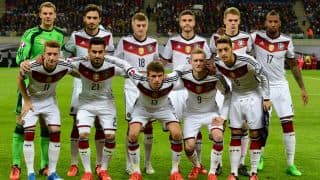