Indian recurve mixed pair of Atanu Das and Deepika Kumari stormed into the final to assure themselves a medal in the third stage of Archery World Cup.

Antalya (Turkey): Indian recurve mixed pair of Atanu Das and Deepika Kumari stormed into the final to assure themselves a medal in the third stage of Archery World Cup on Tuesday. The sixth seeded Indian pair put up a commanding display to down the second seed Italians Mauro Nespoli (a two-time Olympic medalist) and Guendalina Sartori in 5-1 straight sets. The Indian duo will take on top-seeded Korean pair of Ku Bonchan and Choi Misun in Sunday’s gold medal clash. In their road to the final, Das and Deepika faced a tough quarterfinal match against their Russian counterparts as they bounced back from being one set down to seal a 5-4 win in the shootoff (19-18).

Earlier in the day, they beat Turkey 5-1 to enter the last eight. Indian compound mixed pair of Rajat Chauhan and Lily Chanu Paonam made a first round exit going down to the USA’s Braden Gellenthien and Crystal Gauvin 5-7. The highlight of the day was a world record feat by the Korean trio of Choi Misun (686), Ki Bo Bae (682), and Chang Hye Jin (677) who scored a combined 2045 points to beat the team ranking round world record by seven points.

Korea held the previous record – and has held it since before the start of the World Cup era, when the Olympic team at Athens 2004 scored 2030. Ki Bo Bae and Choi Misun remain from the team that was the previous record holder from Medellin 2014. Kang Chae Young was part of that team – while in 2016, and the Korean Olympic team for Rio, it’s Chang Hye Jin.

“We had good teamwork in Korea training, so this is a great start for us in the lead up to the Olympic Games. Each of us gains confidence for the competition for this,” reigning individual Olympic Champion Ki Bo Bae said. Deepika and Bombayla Devi Laishram finished 12 and 13 with scores of 663 and 661. 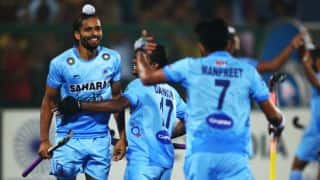