The 23-strong British squad could only manage one silver and two bronze medals.

International Association of Athletics Federations (IAAF) president Sebastian Coe has alleged that some British athletes are hiding from major competitions after the team’s disappointing performance at the World Indoor Championships. The 23-strong British squad could only manage one silver and two bronze medals – a tally that left them 16th on the medal ladder below Bahrain, Venezuela and Burundi. “I want to see more athletes competing. Some of them are hiding away from competitions. And there is no substitute for competition, there really isn’t. You are not going to get it on the training track. You are not going to get it at a Diamond League where you are just following a pacemaker. You do need to learn the craft,” Coe was quoted as saying by The Guardian.

The British outfit was dented by injuries to Jessica Ennis-Hill, Greg Rutherford and Katarina Johnson-Thompson while Mo Farah has opted to run the World Half-Marathon Championship in Cardiff next weekend. Coe added that except Farah some of the top athletes are slower than their predecessors some 40 years back.

“These are events you have to use to give your athletes the experience because following pacemakers is a very different game from a championship where you have to think on your feet. I worry that the formative learning years, particularly in middle distance, are being lost on occasions like this,” Coe said.

“Mo Farah is an outstanding athlete but if you go beyond him, you have performances that are slower than 40 years ago. I had a catch-up with Brendan Foster the other day. We were looking at the results of the 1976 Olympic trials at Crystal Palace, which I ran in. And actually the Tony Simmons, the Ian Stewarts, the Brendan Fosters were running quicker than they (current athletes) are now.” 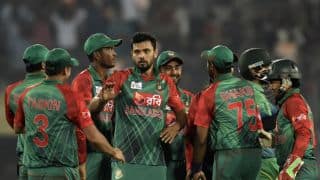