Chinese pair of Gong Jinjie and Zhong Tianshi were penalised for an illegal change in women's team sprint at the track cycling World Championships.

London: Tragedy repeated itself as the Chinese cycling team saw their gold medal downgraded to silver in the same city after four years. It initially looked like a repeat of last year’s top two at the Worlds in Paris with China and Russia taking gold and silver respectively. But the Chinese pair of Gong Jinjie and Zhong Tianshi were penalised for an illegal change in women’s team sprint at the track cycling World Championships on Wednesday, reports Xinhua. There was no leave to appeal and with the Chinese not able to challenge the decision, the gold went to Daria Shmeleva and Anastasiia Voinova in 32.679 seconds. China head coach Benoit Vetu was so furious that he broke his hand after hitting a table.

Four years ago, Gong alongside her teammate Guo Shuang, had been denied an Olympic gold here after an early changeover saw the Chinese pair disqualified despite beating Germans Kristina Vogel and Miriam Welte in the final. Olympic champion Germany was third, beating Australia in the bronze medal race. New Zealand won the men’s team sprint title, beating the Netherlands in the final in 43.257 seconds. Germany was third ahead of France. The Olympic track cycling programme in Rio de Janeiro starts on August 11 with New Zealand the favourites. 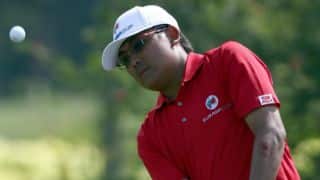