Beilun, China: Zhu Ting top scored for the third successive night as China wrapped up the first weekend of 2016 FIVB women’s volleyball World Grand Prix by beating defending champions United States 3-1 (25-20, 25-19, 15-25, 25-23). Zhu, who had inspired China to victories against Thailand and Germany earlier this week, led her team again in scoring – with 17 points. US middle blocker Foluke Akinradewo finished with one point less on Sunday, reports Xinhua. A spike by Zhu and block by Xu opened the highly anticipated match with 3-0 for China. Gong Xiangyu added an ace for 6-2 and forced the US to ask for the first time-out. China entered first TTO 8-6 ahead and increased it to 12-8 after an ace by Ding Xia. With a good blocking play the US cut the gap to 22-20 and China called a time out. The break did help the host team, who ended the set with a spike by Zhang Changning at 25-20.

The second sets started with a close battle, with teams fighting point by point until 8-7 for China at first TTO. A few mistakes from the US and good offensive play of Xu Yunli put China 12-9 in front. An exchange of attack between Zhu and Akinradewo brought back a close game, but the Americans were still two points behind and called a time-out. That didn’t help the team, as China continued its great play in block and attack with Zhang finishing the set with an ace at 25-19.

The US stormed in the third set with 4-1 lead, which melted to 8-6 at the first technical time out. Great performance for Jordan Larson-Burbach and inforced mistakes of China put the US 13-8 ahead. Both teams then exchanged spikes, but the US didn’t let the set slip from their hands and sealed the deal with a spike of Christa Harmotto at 25-15.

The fourth set began with a close fight, but it was the US that took 8-6 lead at the first TTO. China quickly tied at 8-8, but Harmotto’s kill blocks put US back ahead. Good performance of Zhang and a challenge put China back ahead at 13-11 with the lead increased to 19-15 when Zhu jumped in to help her team. Time out called by the US paid off with team chasing the score to 19-19. Tight fight continued with China staying a point ahead.

A block by Xu handed China first match point, but was saved with a spike by Kelsey Robinson. A challenge of Kelly Murphy’s serve brought the US the point back, but China still had a match point. Another challenge called by the US was unsuccessful, proving that the ball went off the block.  Chinese coach Lang Ping tried to play down the significance of the first week success in the Grand Prix series.

“Although we won the title, it doesn’t mean much, because this isn’t a full-strength US squad. Some of their best players, such as their No.1 setter, didn’t come to Beilun. So we should not get carried away,” Lang said. Earlier in the day, Thailand came from behind to defeat Germany 3-1 (16-25, 28-26, 25-22, 25-16) to finish third place. Just like against China, Kongyot Ajcharaporn proved again to be one of the strongest weapons of Thailand, scoring 21 points for her team. Compared to the match against China, the player added 4 points in block. Lisa Izquierdo led Germany with 14 points.

Germany took an early, impressive lead 5-0, but not without a hand from Thai side and their errors. With the help of Ajcharaporn Thailand came closer, but Germany kept the 8-5 lead at the first TTO. Although Thailand began to play better, Germany maintained its advantage to 16-11. Lisa Izquierdo and Poll Jana’s great play at the end allowed Germans to close the set at 25-16.

The second set began with a tight play point by point, until the first TTO when Thailand went 8-6 ahead. Ajcharaporn yet again stood up to extend the lead to 12-9, but Germany, led in this part of the match by Jana, tied at 13-13 and went 16-14 ahead at the second TTO. Both teams kept the score close, but two blocks, an ace and unsuccessful challenge call by Germany gave Thailand 21-17. Germany didn’t give up, leveling at 24-24. It took Thailand three set points to finish the second set at 28-26.

Just like in the previous set, the game started point by point, with a slight lead of Germany 8-7. The Germans managed to maintain it to 10-7, with point scored by Izquierdo. Germans kept it until 15-12, but couldn’t make it to the second TTO as Thailand leveled at 15-15 and went ahead 16-15. From that point Asians dominated the game, finishing the set at 25-22.

The comeback in the third set boosted Thailand’s confidence and the team hit hard in the fourth set, leading by 8-4 at the first TTO. Nervous moves on Germany’s side forced the team to make some errors, but they managed to stop Thailand from increasing the point advantage. Ajcharaporn made it to 16-12 and her block increased the dominance to 18-12. Motivated by the point difference, Thai kept the control over the match finishing at 25-16. “Although Germany are a young team, they made a lot of problems for our team in the match,” Thailand coach K. Radchatagriengkai said. “For us, this win is very important. It will boost our confidence into next week,” he added. 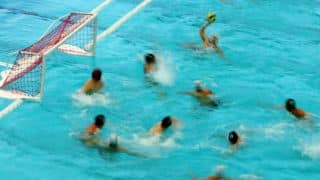