The Delhi golfer has opened up a huge 10 shot lead over Neha Tripathi, who retained her second position with a total score of 148.

Promising golfer Vani Kapoor carded two under 70 to extend her lead after the second round of the Rs 6,00,000 eighth leg of the Hero women’s Professional Tour at the Eagleton golf resort here on Thursday. With yet another sterling performance, the Delhi golfer has opened up a huge 10 shot lead over Neha Tripathi, who retained her second position with a total score of 148. Continuing on from where she left off, Vani played a bogey-free front-nine. In the process, she fired as many as five birdies on the second, fourth, sixth, seventh and ninth holes. Her back nine wasn’t as impressive, and she dropped three shots on the 10th, 11th and 15th holes. Despite that, she finished with an impressive total score of 138 to stay 10 shots clear of Neha.

Hero order of merit leader Neha had an indifferent day in the park, carding four bogeys on the second, fourth, sixth and 10th holes along with a double on the 12th. She carded the lone birdie of her round on the 11th hole to finish with a score of five over 77.

Delhi’s Mehar Atwal was the most improved player on the day. She started the round at tied eighth position but thanks to her effort of one under 71, only the second sub-par score of the round, she finished at tied third position with Kapurthala’s Gursimar Badwal, both with identical totals of 150 after 36 holes.

Mehar started impressively, carding a birdie on the first hole, but soon lost the advantage through a bogey on the second. Thereafter, she added three more birdies to her tally on the eighth, 10th and 15th holes, but a double bogey on the 17th meant that she had to be content with the tied third place.

Gursimar’s card of three over 75 included four birdies on the fifth, 14th, 16th and 18th holes along with five bogeys on the first, eighth, ninth, 10th and 12th. She also carded a double on the 15th hole.

Delhi’s Gauri Monga is placed fifth with a total score of 152, followed by Panchkula’s Amandeep Drall at 153 and Jaipur’s Afshan Fatima at 154 in sixth and seventh position respectively. 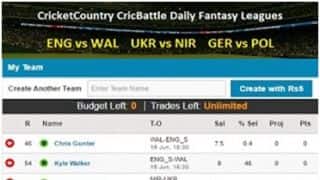