Lahiri failed to make it past first round of Memorial Cup

Dublin: Ace Indian golfer Anirban Lahiri failed to repeat his sixth place finish at the Colonial last week as he ended joint 44th after the first round of the Memorial Golf Championship, held at the Muirfield Village here. Lahiri, who started on the 10th, shot two-under par round of 70 to share the spot with Jordan Spieth. The Indian hit four birdies and two bogeys, on the ninth and 18th but missed a bunch of short birdie putts on Thursday. The 28-year-old birdied 12th, 14th, fifth and seventh and dropped bogeys on 18th and ninth. He missed three putts inside eight and a half feet and two of them were on par-fives. After missing short putts for birdies on the par-fives on the back stretch he birdied both par-fives on front stretch.

But at the finish, Lahiri missed a birdie putts just over five feet on par-3 eighth and then one just one under seven feet for par on ninth. But for those misses, he may well have been around 67-68. With 10 birdies, Dustin Johnson finished on top with a round of eight-under 64 while world No.1 Jason Day opened with a 66, No.2 Jordan Spieth shot 70 and Rory McIlroy had a 71. Johnson’s 64 gave him one shot lead over Brendan Steele (65) and there were five players, including Day and Matt Kuchar at 66. Hudson Swafford also shot 66 with a front nine of 29 including five birdies and an eagle. 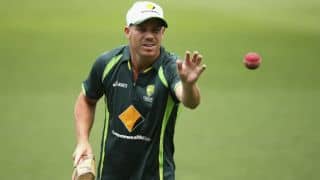