SP Chawrasia was rewarded for his consistency as he brought home a flawless four-under 68 to grab a two-stroke lead at the Indian Open.

New Delhi: India’s SSP Chawrasia was rewarded for his consistency as he brought home a flawless four-under 68 to grab a two-stroke lead over Australian Terry Pilkadaris after the penultimate round of the USD 1.6 Hero Indian Open at the prestigious Delhi Golf Course on Saturday. On a day when overnight leader Pilkadaris failed to even save par, returning with a one-over 73, Chawrasia continued his love affair with the DGC, firing four birdies in his front nine to take his three-day total to 14-under 202. A three-time Asian Tour winner, once again showed his prowess in the short game as he wriggled his way out of tricky situations. He found trouble on hole 12 when his tee shot landed in thick and thorny bushes. Standing in an awkward position, he calmly chipped out to safety and holed out to save par from the edge of the green.

“I feel that today I played very well and made some good putts. On the 10th and 12th holes I had to make saves. Those two holes at 10th and 12th made a lot of difference,” said two-time European tour winner. It turned out to be a good day for the Indians as a pack of four Indians — defending champion Anirban Lahiri (67), Rashid Khan (69), Rahil Gangjee (66) and Arjun Atwal (67) — made an upward movement to put themselves in contention in the final round.

Anirban and Rashid were tied third at 10-under 206, one stroke further behind was Rahil sharing the tied fifth spot with Korea’s Jeunghun Wang (66), France’s Sebastien Gros (68) and Brazil’s Adilson Da Silva (69). Arjun was one stroke further adrift at eight-under 208. A four-time runners-up, Chawrasia fired a 12-feet birdie putt at the first, picked up a shot at the sixth, hitting the second shot close to the pin, and then shot a 20-feet putt for a birdie at the seventh hole. He also earned a stroke at the eighth and then parred the next nine holes in the back nine.

“On the back nine, few putts didn’t go in even though I played pretty well on the front nine,” he said. Going into the final round would give Chawrasia a sense of deja vu as he had a similar two-stroke cushion ahead of Bangladesh’s Siddikur Rahman last year with Anirban a good seven strokes behind. But fortunes fluctuated on the final day as Chawrasia sunk with a 76 and Anriban forced a play-off after carding 69 and eventually won the title with a birdie.

“Honestly, the Hero Indian Open is a very important tournament for me and for sure I want to win it because I have finished second over here four times,” Chawrasia said. “My next goal is to play in the Olympics, so if I manage to win over here, I will make it to the team,” he signed off. Despite bringing a blemish-free 68, his best card of the week, Lahiri was frustrated to miss chances in the back nine.

“It was a good round but I am disappointed with my back nine. It was frustrating that I could not get as many birdies as I would have wanted. A lot of chances went abegging. I didn’t putt too well, missed 10 to 20 feet putts at least 6 or 7. I missed a green but I am happy that I didn’t drop a shot today,” he said. “The front nine is faster than the back nine as in the afternoon the grass grows and it doesn’t roll as much. I could have shot a couple of shots better but I have put myself with a chance. Let’s see how it goes tomorrow. Traditionally, leaders don’t hit high scores on the final day.

“If the wind is down and it is dead calm tomorrow then it will be difficult to shot say nine under or catch the leader. I don’t expect the leader to go back, I can’t control how others play or how the weather behaves, I know that I have to putt better to make a dent tomorrow,” Lahiri added. 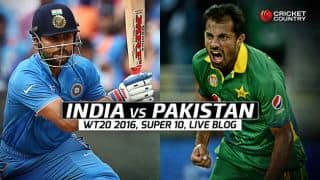