Shimla: Himachal Pradesh on Tuesday observed the second International Yoga Day, with union minister Rao Inderjit Singh taking part in yoga exercises. Former Chief Minister Prem Kumar Dhumal also took part in the event, which was held amid cloudy conditions. No minister from the Congress-ruled state was present on the occasion. Governor Acharya Devvrat performed yoga at Raj Bhawan, where a large number of locals were present. “Yoga is an important part of our rich culture and tradition and purifies mind and soul,” he said in a message.

Chief Minister Virbhadra Singh is away in New Delhi. His cabinet colleagues chose to stay away from the functions. Baba Ramdev’s Patanjali Yogpeeth Trust said 152 yoga camps were organised across the state in which thousands of people participated. BCCI chief Anurag Thakur and cricketer Harbhajan Singh participated in an event with hundreds of students and others at the Himachal Pradesh Cricket Association’s picturesque stadium in Dharamsala amidst a drizzle. Kangra MP Shanta Kumar organized a function in his hometown Palampur in Kangra district in which a large number of foreigners were present. 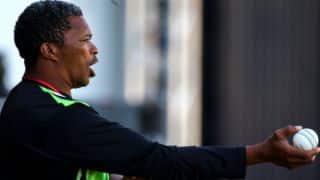