Fan Kexin led a podium sweep for China in the women's 500 metres in the 2016 ISU Shanghai Trophy.

Shanghai: Fan Kexin led a podium sweep for China in the women’s 500 metres in the 2016 ISU Shanghai Trophy, a new short-track speed skating and synchronized skating event, on Saturday. The 22-year-old Olympic silver medallist clocked 43.499 seconds to win the women’s 500m gold medal. Fan, who claimed the 1,000m silver medal at the Sochi Winter Games in 2014, made a strong sprint in the last lap and leapfrogged teammate Qu Chunyu to grab the title. Lin Yue, also from China, won the bronze, reports Xinhua. On the men’s side, China claimed the third title of the tournament as Wu Dajing grabbed the gold in 41.010 seconds.

Liu Shaoang of Hungary took the silver medal at 41.042 while his elder brother Liu Shanglin came third with 41.213. Wu, also a silver medalist in Sochi 2014, vowed to make it better in the 2016 World Championships next week in Seoul. Team Paradise of Russia won the title of the synchronized skating of the Shanghai Trophy with a total score of 205.33 points. Haydenettes of the United States ranked second with 201.01, while Surprise of Sweden was third with 200.37. 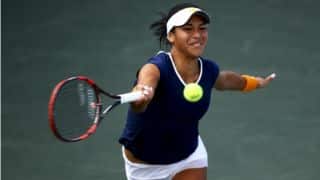