Chennai: The boxing legend who flew like a butterfly and stung like a bee, Muhammad Ali, had sparred in Madras that is now Chennai way back in 1980. During his visit Ali had an exhibition bout with former word heavyweight boxing champion Jimmy Ellis. Ali also boxed with few local pugilists, including a small boy.  It was a memorable visit for two city journalists apart from many. “I was a fan of Mohammed Ali from his Cassius Clay days. Even now I am thrilled and my fingers can feel the sensation of touching him,” Desikan Krishnan, former photo editor of The Hindu daily, told IANS.

Musing about that event, Krishnan said he was just below the ring shooting pictures of his hero. “The turnout of the media fraternity was low. There were just three or four photographers. It is true those were the days when satellite channels were not there. But even then the media turnout for the event was not much,” Krishnan mused. “While the exhibition match was held at the Nehru Stadium, the crowd turnout was also relatively less,” he said. The event was jointly organised by the Tamil Nadu State Amateur Boxing Association and a private company.

“As we were so near Ali, I suddenly had the urge to touch him. There was no opportunity for a formal handshake as it was not a press meet. I was able to touch his rib after the match. Even now I can feel the sensation in my fingers,” Krishnan said. At the press meet, while Ali answered the questions thrown at him, there was one question from a young reporter that sort of jabbed him. “I had asked him about people questioning his status as ‘The Greatest’ as most of his wins were on unanimous decision or split points verdict and not knockouts,” recalled Partab Ramachand to IANS.

He was then a young sports journalist with the Indian Express daily. Ali began to answer the question and then asked Ramachand to come up to the table. “I was nervous what if Ali hits me in a playful manner,” Ramachand said. However Ali continued pointing out his face sans fight scars and asked Ramachand whether he was convinced that he is ‘The Greatest’.

Not wanting to test ‘The Greatest’ any further, Ramachand agreed with the champion. At the exhibition bout with the local boxers, Ali was at his best in entertaining the crowd. “He mockingly fell down while fighting a 10-year-old boy,” Ramachand said. “Ali also knelt before the boy so that latter can reach his face. When he boy tried to hit the champion’s face, Ali swayed and avoided the punch. The boxing legend then stood up and asked the boy to hit him on his stomach. When the boy jumped to hit, I clicked one of my memorable pictures,” Krishnan recalled. 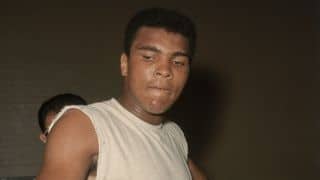