Anirban Lahiri signed off tied 28th at the CareerBuilder Challenge with a final-round card of one-under 71.

La Quinta: Indian golfer Anirban Lahiri signed off tied 28th at the CareerBuilder Challenge with a final-round card of one-under 71, marking a creditable start to his maiden season as a full member of the PGA Tour here. The two-time winner on European and Asian Tours last year, Lahiri, who held a share of the lead after the first round and was still in Top-3 at the midway stage, was unable to work the magic on the greens over the weekend. After being 12-under for the first 36 holes, he was two- under for the next 36. Jason Dufner (70), who had at least a share of the lead from the first round, beat David Lingmerth in the play-off after they both ended final round at 25-under 273.

Lahiri, 28, had bad starts in both the weekend rounds played at the Stadium Course, which was the toughest of the three used this week. Lahiri, after opening the week with a bogey-free 64, added a four-under 68 before closing with 71-71. “I got off to two bad starts over the weekend. I feel I need to adjust to the lines on the greens and the Rye grass,” said Lahiri. “Despite good scores in the first two rounds, I felt that at least in the second I missed a bunch of putts, but was in a good position going into the weekend. Then I had bad starts on Saturday and Sunday.” Lahiri missed a nine-footer for birdie on the second and then went into the greenside bunker and rough to bogey the third.

On the par-five fifth, he went into the water and after a penalty drop had his second bogey of the day. Two nice approach shots on seventh and eighth saw him recover from those bogeys and he turned in even par. On the back nine, Lahiri birdied the 11th, missed a 13- footer for birdie on 12th, missed a 10-footer for par on 15th. He missed another birdie from 13 feet on 16th before finding a closing birdie on 18th. He was, however, optimistic and added, “I still feel the game is in good shape. Hopefully I will play more consistently over the next few weeks. I am now headed to Farmers Insurance this coming week. I want to play as much as I can at the start of the season and get used to it all.”

Dufner, the 2013 PGA Championship winner, shot two-under 70 while the hard-charging Lingmerth, carded 67 to force a play-off. On the first extra hole, Dufner sank a clutch, seven-foot putt for par at No. 18 to send the duo back to the tee. On that hole, Dufner emerged victorious with a par, as Lingmerth’s errant approach shot went into the hazard. Dufner’s fourth career win came as he continues to ride the wave of momentum this season. Before this week, he finished T9 in his last two starts at The RSM Classic and last week’s Sony Open in Hawaii.

James Faulkner-Kevin Pietersen back with their friendly repartee 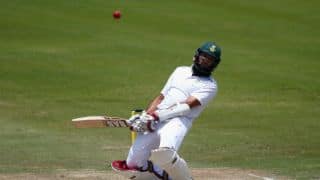