Viktor Chegin is also a former head of the Olympic training centre of the Republic of Mordovia.

Berlin: German television channel ARD has claimed that Russia’s race-walking coach Viktor Chegin, former head of the Olympic training centre of the Republic of Mordovia, is still working with Russian athletes despite being banned for life. The fourth episode of ‘Doping Secret: Showdown for Russia’ was broadcast by ARD late on Wednesday in which this allegation was broadcast, reports Tass. ARD journalist Hajo Seppelt is heard in the film saying he was tipped by a Russian female track-and-field athlete, whose name was not identified, that Chegin was allegedly in the Black Sea town of Adler where leading Russian race walk athletes train.

He said he had sent an informer, a certain ‘Sergey’, to Adler to film this. The ARD footage showed a minibus with tinted windows where, as Seppelt maintains, Chegin was sitting (the face, however, could not be seen distinctly). Then, as the film goes, the journalist meets with an anonymous informer, who maintains having seen Chegin in the minibus and says he continues training athletes. At the end, Seppelt meets with an experts who earlier worked for the German secret services, who compares Chegin’s photo with that on the footage, and says he is ‘95-99% percent sure’ it was Chegin.

The film said the footage was taken on April 27 while the decision of the Russian Anti-Doping Agency (RUSADA) to disqualify Chegin for life was approved by the Russian Athletics Federation on March 25. Seppelt also alleged that in 2014, Russian sports minister Vitaly Mutko did not make public information about a certain unnamed football player of Krasnodar club testing positive for doping substances.

He maintained having received from an informer the minister’s correspondence with the anti-doping laboratory concerning the football player who had tested positive for hexarelin (having growth hormone-releasing activity), but went unpunished. 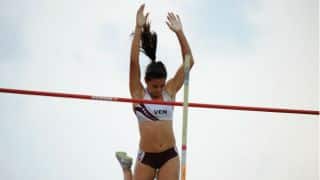