The Sports Minister announced that Rs 42 crore has been allocated for the upgradation of Jammu's Maulana Azad Stadium.

New Delhi: Sport Minister Jitendra Singh today said that the government would upgrade two major sports stadia in Jammu & Kashmir and also construct new ones. The Minister announced that Rs 42 crore has been allocated for the upgradation of Jammu’s Maulana Azad Stadium. “The execution of work has been entrusted to NPCC, which will further engage different agencies for upgrading M A Stadium,” said the Minister after convening a meeting of the Ministry to discuss some of the pending issues related to J&K. The work is scheduled to start sometime after the end of the monsoon season and before the year end.

“The upgradation of the MA Stadium will include a modern synthetic athletic track, synthetic hockey track, swimming pool, upgraded facility of toilets, galleries and change rooms as well as provision for latest sports equipment. In addition to stadia in Jammu and Srinagar (Bakshi Stadium), the existing stadia in Poonch and Rajouri will also be upgraded at the cost of Rs 4 crore,” he added. He also said that there were plans to build 12 new indoor game halls at other different locations in the state.

“An execution plan is also being worked out for promotion of water sports at Mansar in Jammu and Pahalgam in Kashmir,” Jitender added. Sports Secretary Rajeev Yadav and other senior officers were present at the meeting. 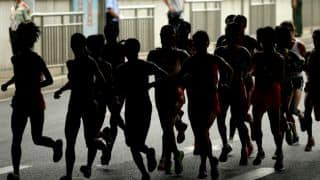