Sudha Singh on Monday said the record is a "gift" to her fans for their support.

New Delhi: After shattering the national record in women’s 3,000 metres steeplechase at the International Amateur Athletics Federation (IAAF) Diamond League Meet in Shanghai, star Indian athlete Sudha Singh on Monday said the record is a “gift” to her fans for their support. Sudha, who has already booked her berth for Rio Olympics, said her coach Nikolai Snesarev had motivated her to do well and “gift something back to the country for the support”. The 2010 Asian Games gold medallist felt that her eighth place finish in the second leg of the prestigious IAAF Diamond League Meet in Shanghai, has come at the right time and it will boost her preparations for the Olympics in Rio de Janiero in August.

Sudha’s new mark of 9:26:55 minutes, rewritten 15 days after Asian champion Lalita Babar set the then existing record here, has intensified the friendly-rivalry for the duo who enjoy a fine chemistry and train under foreign expert Nikolai Snesraev. For Sudha, this was her first international outing on track since the 2014 Asian Games and she admitted to have butterflies in her stomach prior to the race.

“We reached there in advance and also trained a bit. It was a bit cold, around 15 degree Celsius, but once the race started I didn’t know what was happening. This was my first international race in the steeplechase since 2014 Asiad,” said Sudha, who clinched her Olympics berth in the first track event she participated since then, at the Federation Cup on April 29.

Sudha clocked 9:31.86 minutes to achieve the Rio qualification mark of 9:45.00. Meanwhile, Lalita, who had already qualified for the women’s 3,000m steeplechase and marathon for Rio, said she was unable to run her natural race in Shanghai, but admitted that ups and downs are part and parcel of competing at the highest level.  “I was unable to run in my natural style, but these things happen in our career. I will now concentrate on bettering my performance,” said Lalita, whose national record stood at 9:27.09s. She clocked 9:43.30s to finish 13th in Shanghai. The trio of Sudha, Lalita and Snesarev returned from China late Sunday night and are slated to resume training in their Bengaluru camp later on Monday. 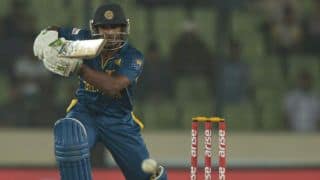 Kusal Perera, SLC have not requested for compensation: ICC