Seventeen Indian truck drivers will compete against each other to gain 12 spots in the Season 3 of the T1 Prima Truck Racing Championship.

Mumbai: Seventeen Indian truck drivers will compete against each other to gain 12 spots in the Tata Motors-conducted Season 3 of the T1 Prima Truck Racing Championship, scheduled to be held at the Buddh International Circuit (BIC) in Greater Noida on March 20. For Season 3, Tata Motors kicked-off the T1 Racer Progragramme and so far 17 Indian truck drivers have been selected from a pool of over 550 entries from the company’s customer base. These drivers will further be narrowed down to 12 to compete against each other at the internationally acclaimed circuit, a Tata Motors release said on Thursday.

The company today also unveiled the new T1 2016 race truck with a total 43 additional modifications, for a faster, more exciting Season 3, the release said. While season 1 of the championship witnessed over 25,000 spectators in its debut race, over 50,000 cheering enthusiasts witnessed the race in Season 2, held in March 2015, the release said. Like in the earlier years, Season 3 of the event will continue to host experienced international drivers representing six teams, featuring 12 Tata Prima race trucks built for the purpose. On the race day, there will be two categories, with four races Two super class comprising Indian drivers Two Pro Class comprising internationally acclaimed drivers with proven experience in the field of truck racing, the release added. 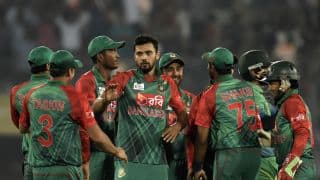 Five Reasons why Bangladesh can be a successful T20 side