Acrobats in action before the start of Essex-Surrey clash

Acrobats in action before the start of Essex-Surrey clash

The emergence of Twenty20 (T20) competitions has added a different flavour and pace to the game of cricket. The emergence of Twenty20 (T20) competitions has added a different flavour and pace to the game of cricket. Call it the Indian Premier League (IPL) or Big Bash League (BBL), cricket fanatics around the globe simply wait for the respective tournament to take place.

The NatWest t20 Blast is a Twenty20 (T20) cricket league is one such tourney in England and Wales, which was started from 2014 by the England and Wales Cricket Board (ECB), replacing the Friends Life t20 competition. This year, the inaugural match was played between Durham Jets and Northamptonshire Steelbacks on May 15.

In this above photograph on Saturday, acrobats are seen giving their performance and enthralling the crowd before the start of Essex-Surrey clash.

Coming to the match, Essex won the toss and elected to bowl first. Surrey piled a good total of 171 for 4 in 20 overs, with Steven Davies and Gary Wilson starring with the willow.

The competition sees 18 teams divided into two groups with nine teams each. The tourney runs in a Round-Robin format where top four teams from each group qualify to the next round. The NatWest t20 Blast which started on May 15 will run till August 29 with the finals expected to be played at Edgbaston. 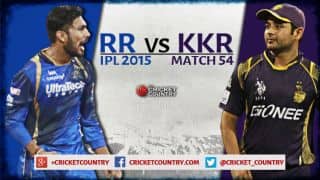