All eyes will be set on Cardiff as cricket’s most iconic Test series – The Ashes, commences on Wednesday. Australia has not tasted a series win in England in the last 14 years and look set to break the jinx.

All eyes will be set on Cardiff as cricket’s most iconic Test series – The Ashes, commences on Wednesday. Australia has not tasted a series win in England in the last 14 years and look set to break the jinx. Suraj Choudhari and Suvajit Mustafi take a closer look at the players (probable XI) of both the teams and do a comparative study between them.

Both England and Australia have a balanced side but when a comparison is made between the players, Australia clearly holds an upper hand. They wear a more balanced look than England; and it wouldn’t be a surprise if they went on to seal the first Test at Cardiff.

England’s strength lies in its bowling. The overcast conditions, tailored pitches and lateral movement will provide enough help to swing bowlers like James Anderson and Stuart Broad. Although England have a good batting attack, sans Kevin Pietersen they lack the extra zing. They will rely more on their bowling. On the other hand, Australia have all their areas covered. Ryan Harris’ exclusion has affected them massively but they have enough firepower in Mitchell Johnson, Mitchell Starc and Josh Hazlewood to inflict damage. When compared to England’s, Australian batting looks much more formidable with experienced and in-form likes of Michael Clarke, Steve Smith, Chris Rogers and Shane Watson.

Australia’s key player at the top will be David Warner, known for his belligerent approach with the bat. Warner not only scores big runs but scores them at a brisk rate. When compared, Cook is definitely more solid in his approach but lacks ability to accelerate at will. The sport has changed a lot in recent times and even in Test cricket, strike-rate matters. The more quickly you get the runs, the more time your bowlers have to bowl out opponents and Australia over the years have been the best exponents of it. [Is David Warner the best left-handed batsman in contemporary cricket?]

Another Australian player to watch out for will be Smith. The 26-year-old’s evolution as a batsman has been phenomenal and is currently the ranked one batsman in Test cricket. In last ten Tests, Smith averages 93 with the bat. His rock-solid temperament will prove to be the key. England have similar class in Joe Root to match Smith. In the last one year, Root averages over 81 and has been England’s main man in the middle-order. Expect a competition from these two run-machines. [Steve Smith’s rise to the No 1 batsman in Test cricket & Joe Root: The apt man to take England forward]

When we talk about captaincy, Michael Clarke indubitably has been one of the most successful captains and is hailed for his aggressive approach, whereas Cook has been too defensive in the recent past and his leadership has drawn criticism from many. However both the captains have won one Ashes a piece. [Alastair Cook needs to be reinvent himself as a captain]

England and Australia have enough ammunition to make it count what will matter is the performance on the field, and this Ashes series will truly test the characters of these players.

More from these writers:

Nathan Lyon vs Moeen Ali: It’s spin that will play a key role in the Ashes 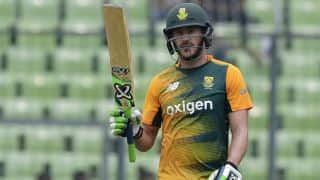