On the 79th birth anniversary of Garry Sobers, the greatest ever all-rounder, the game lost one of the premier all-rounders of his time when Clive Rice lost his battle with cancer. The South African cricketer, who passed away on Tuesday, was a brilliant all-rounder, well capable of breaking into any international side in the world — purely as a batsman or purely as a bowler. [Read: Cricket world pay their tributes to Clive Rice]
Rice played in the era of the four great all-rounders — Ian Botham, Kapil Dev, Imran Khan and Richard Hadlee. It was unfortunate that Rice’s career coincided with South Africa’s ban because of their apartheid policies. But the cricket world got to follow his exploits for Nottinghamshire, World Series Cricket (WSC) and the rebel tours. [Read: Clive Rice: 10 interesting things to know about the brilliant all-rounder]

By the time the ban was lifted, he was 42 and had the distinction of being the first South African One-Day International (ODI) skipper but couldn’t play Test cricket. Few years down the line, Rice’s countryman Jacques Kallis went on to be the greatest all-rounder of modern times, but that was a distinction which could have well gone to Rice and that too in an era where the greatest of them played. The below stats reflect Rice’s impact as a fabulous all-rounder: 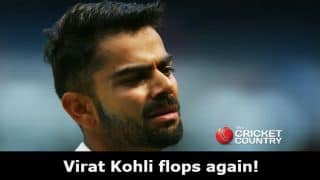 Virat Kohli disappoints again; out for 16 in India A vs Australia A 2nd unofficial Test

Guess whose picture Sourav Ganguly has put as his WhatsApp display image?