McDermott, a Queenslander, whose home ground is The Gabba, has 40 wickets at that venue.

The picture on the left shows a 20-year-old Craig McDermott of 1985, in action at Lord’s. The current bowling coach of Australia made his debut as a 19-year-old against West Indies. During Australia’s 1987 World Cup win, he took 18 wickets in the tournament, including a five-wicket haul in the semi-final against Pakistan.

The six feet two inch well-built McDermott was nicknamed ‘Billy’ from Billy the Kid, the 19th century gunman, who fought the Lincoln County War. McDermott, a Queenslander, whose home ground is The Gabba at Brisbane, has 40 wickets at that venue. He was the highest wicket taker in Tests there, till Shane Warne and Glenn McGrath toppled him.

McDermott was assigned the role of bowling coach of Australia earlier in 2011. However, in 2012, he resigned and was appointed as the new bowling coach and consultant for Ireland.

However, later on in 2013, McDermott returned as the bowling coach of Australia and has had successful tours with the team ever since then. The picture on the right shows a paunchy yet fit Australian bowling coach. 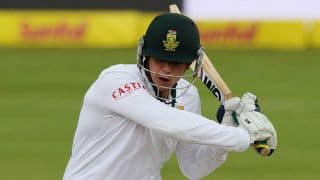