Dominic Cork’s day out at Lord’s; England pull off a thriller to level series against West Indies

Dominic Cork’s day out at Lord’s; England pull off a thriller to level series against West Indies

This Test went on to be one of the most thrilling matches in the game’s history.

England and West Indies have always enjoyed a great cricket rivalry and when the sides met each other for the 100th Test at the Lord’s, it was no different. In fact, this Test went on to be one of the most thrilling matches in the game’s history. In a match that defied all predictions, it was England’s comeback man Dominic Cork who struck the winning boundary when the clock had just past seven on the third day.

On this day, 15 years back, England pulled off a memorable win against West Indies in what was the second Test of the Wisden Trophy. Cork, who was making a comeback in the side after more than one and half years, turned out to be England’s hero.

West Indies, who had won the first Test of the series, scored 267 runs in the first innings and bowled out England for 134, with Courtney Walsh and Curtly Ambrose picking four wickets each. However, in the second innings the English seamers led by Andy Caddick demolished the West Indies batting line-up, as they managed a mere 54. Cork, who had picked up four wickets in the first innings, claimed three this time. England needed 188 to win but once again the famed pair of Walsh and Ambrose stood in their way. While Walsh wrecked the top-order, Ambrose kept it extremely tight. Walsh got six and when Ambrose trapped Caddick leg before, England were 160 for eight. In all possibility it seemed like West Indies were going up by 2-0 in the series. 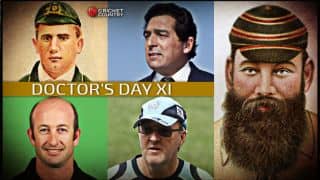 Mohammad Hafeez given Indian visa for bowling test in Chennai