In Holland’s words, it is 'talking everyday' that keeps the romance alive despite the distance.

Former Miss World Australia Erin Holland has been dating Australia and Brisbane Heat cricketer Ben Cutting for almost a year now (11 months to be precise). This may sound quite normal, as there is nothing strange in a celebrity model dating a sportsperson. What, however, is unique about the couple is the fact that their relationship is a long distance one, says a report published in the cricket magazine The Delivery.

Yes, you heard it right. Holland, originally from Cairns, is based in Sydney while her 28-year-old beau is based in Brisbane and travels across the cricket seasons. So what keeps this romance alive despite the distance? In Holland’s words, it is ‘talking everyday’ that keeps the fire burning. She further adds that, “when you find the right person, the pain and the torture doesn’t feel so bad and it’s worth it, distance is worth it.”

Holland and Cutting met through mutual friends and soon the rumours of their relationship started doing the rounds. They even attended the Allan Border Medal together back in January this year. The couple confirmed their relationship status when both were in India where Cutting was participating in the Indian Premier League (IPL) and representing the Rajasthan Royals (RR) franchise. The two had a great time holidaying in India and one of Cutting’s Instagram posts confirmed the same: 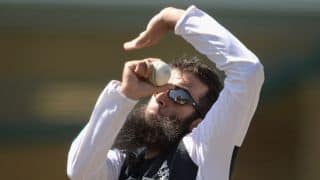