This was South Africa s first World Cup, following the end of apartheid. And the Proteas put up an inspiring show.

Floodlights, white ball, coloured clothing, names on the jersey, the 15-over field restriction rule leading to concept of pinch-hitters all made its entry in the fifth edition of the World Cup, hosted in the picturesque Australia and New Zealand revolutionised the sport. There was a change in the format; it was played as a league with the top four top moving to the semis.

This was South Africa s first World Cup, following the end of apartheid. And the Proteas put up an inspiring show. Zimbabwe, who had again won the ICC Trophy, joined their African neighbours in the tournament, with the other seven teams being Australia, England, India, Pakistan, New Zealand, Sri Lanka and West Indies.

The tournament wasn t short of exciting moments and by far New Zealand were the best side in the competition followed by England. New Zealand looked set for an entry into the final, but were thwarted by the blitz of a raw Inzamam-ul-Haq, who scored 60 off 37 balls. In the other semi, South Africa were robbed a final berth due to the controversial rain-rule.

In the end it was Pakistan s cup and a fitting end to the glorious career of their captain Imran Khan. 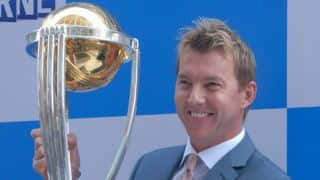