Flashback to 2003 World Cup: India threatens, but Australia seal it in style

Flashback to 2003 World Cup: India threatens, but Australia seal it in style

The tournament was dramatic to say the least. There were walk-outs, washouts and then black armband protests by Henry Olonga and Andy Flower protesting against Robert Mugabe regime.

The tournament was hosted by Africa for the first time. It was a carnival time in South Africa and this edition saw 14 teams participate. Apart from the 10 Test playing nations — Australia, Bangladesh, England, India, New Zealand, Pakistan, South Africa, Sri Lanka, West Indies and Zimbabwe, and the four other teams were Kenya, Canada, Namibia and Netherlands. ICC Cricket World Cup 2015: Full Coverage

The tournament was dramatic to say the least. There were walk-outs, washouts and then black armband protests by Henry Olonga and Andy Flower protesting against Robert Mugabe regime.

Four big teams were knocked out in the first stage: hosts South Africa, runners-up Pakistan, two time champions West Indies and three-time finalists England. What was surprising was Kenya’s form in the tournament. They pulled off a couple of major upsets and were helped by the points they gained from walkover from New Zealand. They managed to enter the semi-final where they lost to India.

Australia remained unbeaten and were the best side in the competition, followed by India. It was fitting that these two sides played the final, which turned out to be a no contest. Ricky Ponting played a blinder and ensured Australia that they lifted the cup for the third time. 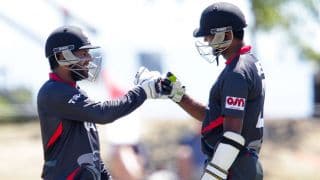