Rubel Hossain screamed in joy and while celebrating with teammates mouthed a few works meant towards Virat Kohli as he was walking back to the pavilion.

Coming in to bat at number three after opener Shikhar Dhawan’s dismissal in the 17th over, Kohli was greeted with words and laughter from Rubel. The Indian vice-captain chose to ignore the rather cold welcome and set on the mission of stabilizing the innings but the journey was cut short in just five minutes. Kohli was caught behind when he nicked one of Rubel’s delivery as Mushfiqur Rahim made no mistake and took a fine catch to dismiss him for just three runs.

As seen in the above picture by Getty Images, Rubel screamed in joy and while celebrating with teammates mouthed a few works meant towards Kohli as he was walking back to the pavilion. The disappointed batsman ignored it once again, unlike him and slowly walked off the field.

Well, it wasn’t the first time the two were involved in an on-field tussle. Going back to 2008 when both were playing for their respective U-19 teams, in an India-Bangladesh group match, the then captain Kohli and Rubel had a go at each other. (READ: The final standing in the groups and the line-up for the quarter-final)

It happened again in the 2014 Asia Cup, when a ton-up Kohli was dismissed by Rubel. And finally, on Thursday it was repeated when Rubel got the important wicket of his ‘old friend.’ Later in the match, Kohli smiled and nodded his head when Rubel was dismissed by Umesh Yadav. 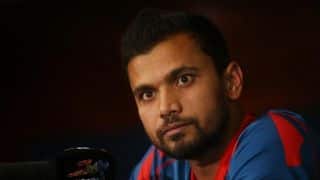