Getty Images captured the jubilant Mahmudullah jumping in merriment and air-fisting on reaching his century against New Zealand.

Getty Images captured the jubilant Mahmudullah jumping in merriment and air-fisting on reaching his century in the ongoing ICC Cricket World cup 2015 match against co-hosts New Zealand at Seddon Park, Hamilton on Friday. (READ: New Zealand vs Bangladesh, Pool A match in Hamilton in caricatures)

He smashed his hundred from 110 balls and celebrated it by hitting three consecutive boundaries off Mitchell McClenaghan in the 46th over. His score of 128 included 12 fours and three sixes as he powered Bangladesh to a good total of 288 runs for the loss of seven wickets in 50 overs. On Monday, against England at Adelaide Oval, he became the first player to score a World Cup century for Bangladesh, Mahmudullah now became the first-ever Bangladeshi batsman to score back-to-back World Cup hundreds. (ICC Cricket World Cup 2015: Full Coverage)

The right-handed batsman’s efforts couldn’t see Bangladesh registering another win as New Zealand beat them in a closely contested match by three-wickets, thus maintaining their top spot in the Pool A points table with six out of as many games they played in the tournament so far. Both the nations have qualified for the quarterfinals of the mega-event which will be played next week. (ICC Cricket World Cup 2015: Points Table) New Zealand have to be ‘desperate on the field’, says Brendon McCullum 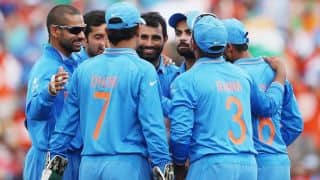