When it comes to the Cricket World Cup, India have quite a record against some of their oppositions. Take arch-rivals Pakistan for instance; India have an envious record against their staunchest of enemies, having won all six matches against them between the 1992 and the 2015 edition of the mega event (barring the 2007 one, when the two teams did not meet). Even the slightest of mention of this record is enough to pump up the Indians and trigger a ferocious battle between people from the two sides on social media. However, till 2015, the same Indian fans would go mum when reminded about their World Cup record against South Africa.

Ever since the rainbow nation came out of its cricketing isolation and made a return to international cricket in 1992, it remained unbeaten against India at the World Cups. In the 1992 edition — which also marked their first appearance at the World Cups — South Africa beat India by six wickets. In a rain-affected game, India scored 6 for 180 from the stipulated 30 overs; a target considered good enough to win in the pre-T20 era. However, half-centuries by Peter Kirsten and Andrew Hudson saw the Proteas home. South Africa 1. India 0.

The two teams met once again in 1999, after skipping a date in the 1996 edition. India once again batted first and riding on Sourav Ganguly and Rahul Dravid’s fifties, posted 5 for 253 on the board. The total, although not a mighty one, was defendable considering the lively English conditions. But once again the Indian bowlers failed as Jacques Kallis’ 96 and cameos by Jonty Rhodes and Lance Klusener overpowered them to help South Africa win by four wickets. South Africa 2. India 0.

The two teams next met 12 years later in the 2011 edition in India (2003 and 2007 editions did not witness an India-South Africa clash, as the latter crashed out in the first round in 2003 while the same fate befell the former in 2007). Third time on the trot, India batted first and looked firm in the driver’s seat till the centurion Sachin Tendulkar was on crease. But his wicket triggered a collapse as India went from 1 for 267 to 296 all out, losing last nine wickets for 29. Half centuries by Hashim Amla, Kallis and AB de Villiers saw them home once again. South Africa 3. India 0.

The loss in 2011 notwithstanding, India went on to win the title and entered the 2015 edition as the defending champions. Pretty early into it, they were up against South Africa; a side they had never beaten in this tournament. And when they came out to bat first in the high-voltage game, people more or less presumed they were going to lose it going by the previous three games, where India lost batting first. But the history was going to change at Melbourne, where in front of a ballistic crowd of 86,000, Shikhar Dhawan’s dazzling 137, Ajinkya Rahane’s quick-fire 79, fantastic bowling and some outstanding work in the field helped India break the World Cup jinx against South Africa and win by 130 runs. The win — that took 23 years and seven World Cups to come — finally exorcised the ghosts of the past editions. 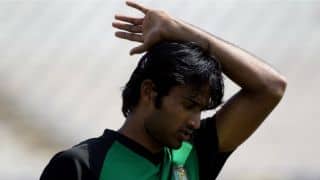