it came as a surprise when India and Karnataka cricketer Abhimanyu Mithun got engaged to his ladylove.

Indian cricketers usually love to make their engagements and wedding a grand affair. They may keep their love stories a secret, but when they decide to get hitched, they never shy away from the media. They do it in style and the amount of media attention such function grabs is unrivalled.

So it came as a surprise when India and Karnataka cricketer Abhimanyu Mithun, who also plays for the Mumbai Indians in the Indian Premier League (IPL), got engaged to his ladylove Rayane, who is Tamil actress Radhika Sarathkumar’s daughter, in a simple ceremony, reported by dna.india.com. The engagement was announced a few weeks ago and the happy event took place in Chennai today in the presence of friends and close family members.

The lovebirds were reportedly waiting for Rayane to graduate from college in England before making it official. The parents of both Mithun, who has represented India in four Tests and five One-Day Internationals (ODIs), and Rayane were all smiles during the ceremony. The handsome Mithun and an elegant looking Rayane exchanged rings and garlands and also cut a beautiful cake on the occasion! There’s no update on the wedding date as yet.

We wish the couple a very happy and prosperous union! 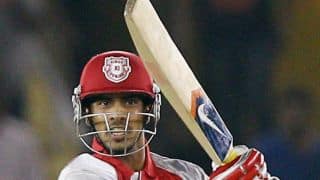 A rare fact about Mike Gatting’s tally of domestic matches