India vs Bangladesh: Head to head in Asia Cup

India vs Bangladesh: Head to head in Asia Cup

India and Bangladesh first met each other in the 1988 edition of the tournament, where India won by nine wickets and Navjot Singh Sidhu was the Man of the Match with his unbeaten 50.

The Asia Cup 2016 goes underway on Wednesday with the hosts Bangladesh taking on heavyweights India. The two teams have a rich history in the tournament, where they have met on 10 occasions, with India emerging victorious nine times while Bangladesh beating their neighbours on one occasion.

Both the teams first met each other in the 1988 edition of the tournament, where India won by nine wickets. Navjot Singh Sidhu was the Man of the Match with his unbeaten 50. The last time the two teams faced each other in Asia Cup was in 2014, where India once again won the match by beating the opponents by six wickets. Virat Kohli was adjudged the Man of the Match for his scintillating hundred.

Bangladesh’s only win against India in this tournament came in 2012, when their spirited side managed to topple the mighty Indians by five wickets. This encounter shall always be remembered for Sachin Tendulkar’s 100th international hundred. But as luck would have it, the master blaster could not make the occasion more special by helping India win.

This is the first time the premier tournament amongst the Asian teams is being played in the Twenty20 (T20) format. With the ICC World T20 just a couple of weeks away, the timing of Asia Cup could not have been better. All the participating teams will look to iron out their flaws and figure out their best combinations ahead of the mega event, besides, of course, winning the Asia Cup. 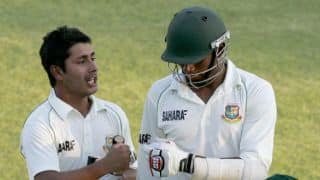