Indian openers fall once again in the tour

Hashim Amla’s 61 hands his side a 7-run lead

Ajinkya Rahane, along with Bhuvneshwar, proves his worth with a brilliant 48

India 9 wickets away from victory

Bhuvneshwar Kumar wins Man of the Match for all-round show

South Africa pose with the trophy 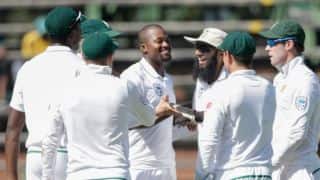