In the first season, Laxmipathy Balaji became the first ever bowler to bag an IPL hat-trick. Playing for Chennai Super Kings (CSK), he achieved the feat against a strong KXIP side in 2008.

On Sunday, Axar Patel joined the elite list of cricketers, who have bagged hat-trick in the Indian Premier League (IPL). Axar picked the key wickets of Dinesh Karthik, Dwayne Bravo and Ravindra Jadeja to bowl Kings XI Punjab (KXIP) to a win against table-toppers Gujarat Lions (GL). This was KXIP’s second victory of the season.

In the first season, Laxmipathy Balaji became the first ever bowler to bag an IPL hat-trick. Playing for Chennai Super Kings (CSK), he achieved the feat against a strong KXIP side in 2008. Since then we have seen 13 more instances where this feat has been achieved. MORE INFOGRAPHICS: Rohit Sharma, an IPL Legend

Amit Mishra has been the most successful bowler in terms of hat-tricks, having achieved this feat thrice. Mishra is an extremely successful bowler in IPLs and stands second in the list of most wicket-takers in the cash-rich league. Only one bowler has bagged a hat-trick twice in the same season. It was KXIP’s Yuvraj Singh in 2009 season in South Africa. READ MORE: Yuvraj Singh, Axar Patel, Kings XI Punjab, May 1 and hat-tricks!

In the first two instances of IPL hat-tricks (Balaji and Mishra), the bowlers went on to claim a fifer but surprisingly, that has not happened ever since. 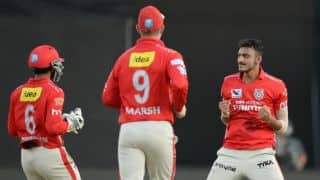