MS Dhoni and Suresh Raina won't play together in the IPL for the first time since its inception.

On the expected lines, India’s limited-overs captain MS Dhoni on Tuesday emerged as the top draw in the Indian Premier League (IPL) draft with the Sanjeev Goenka-owned new franchise Pune opting to pick him first for the stipulated price of Rs 12.5 crore. The Pune franchise had the right to pick the first player in the draft after they bid lowest for the team during reverse bidding. Read: IPL 2016 player drafts: Live pick of the tweets.

Dhoni’s India and Chennai Super Kings (CSK) teammate Suresh Raina was the first preference for the other new team Rajkot, owned by Intex Mobiles. He will also get the same amount of Rs 12.5 crore as he was the first player to be selected by the Rajkot franchise.

Excited to play for the beautiful vibrant city- Rajkot in @IPL. Looking forward to have new teammates and support from the people of Gujarat

Ajinkya Rahane and Ravindra Jadeja, who have been doing well of late, became second choices of their franchises Pune and Rajkot respectively. It was widely speculated that Jadeja might get to play for the home team. Both players will be entitled to Rs 9.5 crore per year. Ace Indian off-spinner Ravichandran Ashwin was picked by Pune as their third choice while New Zealand captain Brendon McCullum was Rajkot’s choice for the same spot. Both will get an amount of Rs 7.5 crore.

The fourth and the fifth spot for both the teams were filled by Steve Smith and Faf du Plessis for Pune and James Faulkner and Dwayne Bravo for Rajkot. The players will get Rs 5.5 crore and 4 crore respectively for the fourth and fifth spot. The players not picked will now go to the IPL auction scheduled for February 6 in Bengaluru. The next edition of the Twenty20 (T20) league will be held from April 9 to May 29, 2016. 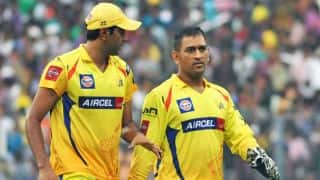