Samuels scored a tenacious hundred and fought a lone battle for West Indies, guiding them to 299.

Jewel Samad of Getty Images captures a moment through his lenses as West Indian all-rounder Marlon Samuels delivers a ball during the second day of the second Test between West Indies and England in St George’s. Over the last many years, Samuels has been an imperative aspect for the West Indian team in every format.

Samuels scored a tenacious hundred and fought a lone battle for West Indies, guiding them to 299. England’s pacers played a huge role in dismantling the WI batting line-up, whereas West Indian pacers struggled against the English openers as they were wicket-less with 74 on the board at the end of the day’s play. Samuels, who also bowls handy off-spin, tried his luck with the ball. Though he kept it tight giving away only one in his three overs, he couldn’t provide the much needed breakthrough.

In November 2013, Samuels was reported for a suspect action during the second Test against India in Mumbai. He was restricted from bowling quicker deliveries in International cricket. Although, quicker deliveries were his primary weapon and he utilised it to a great effect in shorter formats, he still is handy when he bowls his tight off-spins. 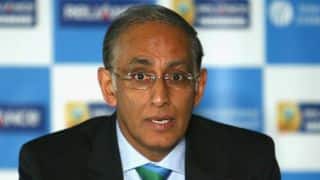