Misbah-ul-Haq is the Test captain of Pakistan and former One Day International (ODI) cricketer who led the side in the recently concluded World Cup 2015. He is one of the most successful cricketers for Pakistan over the years and widely acknowledged for his temperament. He is also regarded as Pakistan’s most successful Test captain as he went past the great Imran Khan’s record of 13 Test wins.

Misbah got married to Uzma Khan, who is a professional painter. They are blissfully married and have two children; son Faham and daughter Noriza. On the occasion of Misbah’s wedding anniversary last week, the Twitter account of Cricket Photos posted the above image, wishing the charming couple.

The cricketer made his Test debut back in 2001 against New Zealand and has been one of the prolific run scorers for Pakistan since then. He averages 49.18 in Tests and 43.80 in ODIs. The numbers are an illustration to his consistency. He retired from ODI cricket after Pakistan’s lost to Australia in the quarter-final of the World Cup 2015. He holds the joint record for fastest Test century with Viv Richards. Both of them scored it in 56-balls. 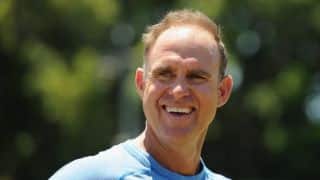