Johnson's inspiring bowling spell got Australia back in the game after they managed a paltry 136 in the first innings.

The Ashes 2013-14 saw Australia reclaim the Urn after seven long years and man who did it for them was Mitchell Johnson. He claimed 37 wickets in the five match series and infused terror in the minds of England batsmen. In the ongoing series, Johnson hasn’t really replicated that but has been effective in the second Test at Lord’s and so far in the Edgbaston Test.

His inspiring bowling spell got Australia back in the game after they managed a paltry 136 in the first innings. Johnson’s two-quick wickets reduced England to 188 for six and in the process, he became the fifth Australian bowler to pick 300 wickets in Test cricket.

He joined the league of Shane Warne (708), Glenn McGrath (563), Dennis Lillee (355) and Brett Lee (310). He achieved this feat in his 69th Test and it’s fitting that the milestone came against England, a side he has traumatised the most. At 33, this is probably his last Ashes and is looking to make the most of it. 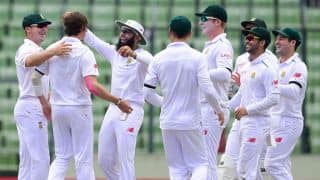