Australian all-rounder Mitchell Marsh is the younger son of Geoff Marsh and is among the top all-rounders from the country.

Australian all-rounder Mitchell Marsh is the younger son of Geoff Marsh and is among the top all-rounders from the country. He is well known for his aggressive batting and effective medium-pace. His elder brother Shaun Marsh also plays for the Australian side.

The above picture of Marsh and his partner Isabelle Platt was clicked by Robert Cianflone for Getty Images when the beautiful couple arrived ahead of the 2015 Allan Border Medal at Carriageworks on January 27, 2015 in Sydney. Isabelle is a fashion model by profession.

Marsh successfully led his Under-19 team to victory in the World Cup 2010. He made his international debut in a One-Day International (ODI) against South Africa in 2011.

In the ongoing Ashes series in England, Marsh did a reasonable job in the second Test after he replaced veteran Shane Watson. He will play a key role in the rest of the series and will settle for nothing less than retaining the Urn. Marsh is a popular Twenty20 cricketer and has played for Deccan Chargers (DC) and Pune Warriors India (PWI) in the Indian Premier League (IPL), and plays for Perth Scorchers in the Big Bash League (BBL)

Vinay Kumar does a David Beckham; tattoos wife’s name on his forearm 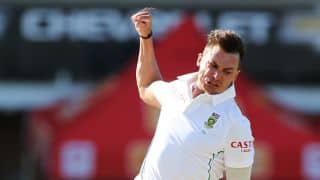