On a chilly morning in Chittagong, on this day in 2004, Dhoni made his international debut.

MS Dhoni is one of the greatest cricketers to have graced the One-Day International (ODI) format. Dhoni, who averages more than 52 with the bat in ODIs, is probably the best finishers in the format apart from being a brilliant wicketkeeper and successful captain. However, Dhoni had a quiet start to his international career.

On a chilly morning in Chittagong, on this day in 2004, Dhoni made his international debut. India, then led by Sourav Ganguly, were touring Bangladesh and it was the first ODI of the series. Bangladesh sent India to bat and seamer Tapas Baishya cleaned-up Ganguly on the second ball of the match. A 128-run fourth-wicket stand between Rahul Dravid (53) and Mohammad Kaif (80) saw India get to a competitive score of 245.

The then Samson-like long-haired Dhoni, walked into bat at No.7 at the fall of Sridharan Sriram’s wicket in the 42nd over. The then 23-year-old Dhoni lasted only a ball, as he was dismissed run out while looking for a single on the first ball he played. The man who has now effected more than 600 dismissals didn’t get any in his first game for the country. India managed to win the contest by 11 runs and the series 2-1. Dhoni, who went on to become one of the greats of the game, had managed just 19 runs in the series at 8.5. Thanks to his glorious form in domestic and ‘A’ games, and also the team management’s faith in him, he was given a longer rope and he didn’t take long to shine.

In the above picture, we see MS Dhoni keeping wickets in his first match and the then Bangladesh skipper Habibul Bashar play a sweep en route to 65. 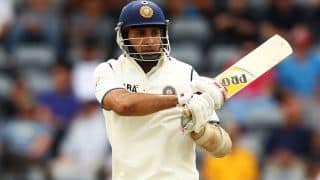 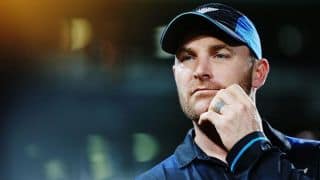