Photo: Peter Nevill gets his Baggy Green from Steve Waugh before 2nd Ashes 2015 Test at Lord's

Photo: Peter Nevill gets his Baggy Green from Steve Waugh before 2nd Ashes 2015 Test at Lord's
By CricketCountry Staff

Australia’s former captain Steve Waugh on Thursday provided the ‘Baggy Green’ cap to Peter Nevill, who finally got his opportunity to play Test cricket. Nevill replaced Brad Haddin for the second Test in this ongoing Ashes 2015, after the latter pull out citing personal reasons. Nevill is the 443rd Test cricketer for Australia, and hails from New South Wales. He has been an understudy for Brad Haddin over all these years, and has spent enough time with this Australian side. He was on the tour of the West Indies before this Ashes, but never expected that he would get a Test debut in the second Test of this Ashes itself. Catch live cricket scores and updates of England vs Australia 2nd Ashes 2015 Test at Lord’s here 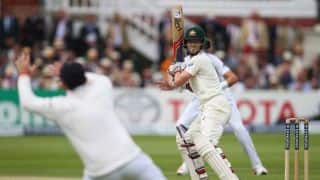