The Karnataka batsman, who made his national debut in 2006, posted a picture on Instagram, confirming his engagement.

It seems Indian cricketers are getting busy settling down this season. After Rohit Sharma, Dinesh Karthik, Harbhajan Singh and Yuvraj Singh, now it’s time for Robin Uthappa to settle down. Only a day after his 30th birthday, the aggressive batsman confirmed his engagement with his childhood friend Sheethal Goutham.

The Karnataka batsman, who made his national debut in 2006, posted a picture on Instagram, confirming his engagement.

And they’re engaged!!! It’s official now!! I’m gonna spend the rest of my life with this gorgeous woman!! I love you with all of me!! Here’s to US!!

Uthappa has been in and out of the national side in recent times, however he remains India’s second choice wicketkeeper batsman after MS Dhoni in limited-overs cricket. His good form has been one of the reasons for Karnataka’s success in recent times and he was also one of the stars for the Kolkata Knight Riders (KKR) outfit when they won the IPL title in 2014. 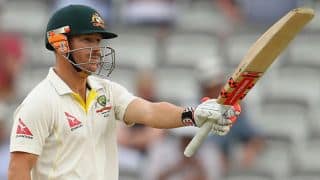