Chennai won the match by 45 runs, win their second match of the IPL.

Chennai Super Kings (CSK) continued their winning run against Sunrisers Hyderabad (SRH) by beating them by 45 runs in the Indian Premier League (IPL) 2015 match at MA Chidambaram Stadium at Chennai. CSK have now won both their matches in the tournament, after having already beaten Delhi Daredevils (DD) in their opening fixture of the tournament. Chennai Super Kings (CSK) thrash Sunrisers Hyderabad (SRH) by 45 runs in IPL 2015

Brendon McCullum scored an excellent unbeaten century to ensure that CSK finished with 299 for 4 in their 20 overs. Skipper MS Dhoni promoted himself at No.4 and and he too got into the act immediately as he scored 53 from just 29 deliveries, which included four boundaries and four sixes. Thanks to healthy partnerships through the innings, CSK managed to set SRH a very stern target. IPL 2015: Brendon McCullum sixth batsman to score 2 IPL hundreds

SRH in their chase got off to a decent start but CSK struck in the fourth over, removing Shikhar Dhawan for 26. Skipper David Warner looked in good touch and was looking to take the game away from CSK as he reached an excellent half-century. But SRH kept losing wickets at regular intervals, which led to their downfall. SRH could not reach their target despite some lusty blows from Kane Williamson and Ravi Bopara down the order. Chennai Super Kings (CSK) vs Sunrisers Hyderabad (SRH), IPL 2015: Highlights 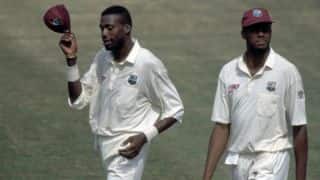