Rohan Gavaskar with his wife Swati

Rohan Gavaskar with his wife Swati

Rohan Gavaskar is the son of Indian legendary cricketer Sunil Gavaskar. Rohan is a former Indian cricketer, a left-handed middle-order batsman and a handy slow left-arm orthodox bowler. He failed to make an impression in his 11 sporadic appearances in One-Day Internationals (ODI) but remained a stalwart for the Bengal Ranji team. He made his ODI debut in 2004 against Australia at Brisbane and also played his last ODI in the same calendar year against Pakistan.

Rohan got married to his childhood friend Swati Mankar in 2003. The above picture of the couple was clicked by Yogen Shah for Getty Images at the ‘Auction For Equality’ event organised by actor Rahul Bose in Mumbai on October 29, 2010.

After a brief career in domestic cricket, Rohan followed his father’s footsteps and is seen commentating in various matches. 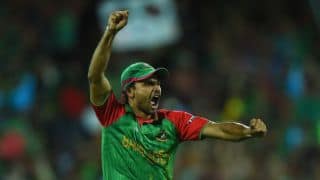