It would be fair to say that Sanath Jayasuriya revolutionised the One-Day game with his explosive batting and will be remembered as one of the greatest left-handed batsmen in modern cricket.

It would be fair to say that Sanath Jayasuriya revolutionised the One-Day game with his explosive batting and will be remembered as one of the greatest left-handed batsmen in modern cricket. The Sri Lankan’s legacy as an all-rounder in ODIs remains unmatched as he has amassed over 12,000 runs and picked up more than 300 wickets.

The portrait on the left is when Jayasuriya made his Test debut against New Zealand at Hamilton in 1991. In this photograph, he has his hair intact, but as he grew in stature, the hairline receded.

The photo on the right was clicked during the first Royal London ODI match between England and Sri Lanka at The Kia Oval in May, 2014 in London, England. The black hair has withered away and the southpaw now sports a shiny bald look.

Sri Lanka won the cricket World Cup in 1996 and Jayasuriya was named the Most Valuable Player of the tournament. He became the first player to play 400 ODIs and after retiring across all formats of cricket in 2012, he was appointed as the chairman of cricket selection committee of Sri Lanka in 2013. Under his tenure, Sri Lanka won the Twenty20 World Championship in 2014. After the World Cup 2015, he resigned from the post. During the 2010 Sri Lankan general elections, he was elected as a Member of Parliament.

The 45-year old has played 110 Tests, 445 ODIs and 31 T20Is, and has represented several Twenty20 franchisees including Mumbai Indians in the Indian Premier League.

IPL 2015: Rajasthan Royals vs Sunrisers Hyderabad at Mumbai, pick of the tweets 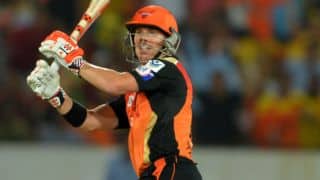