Manjula is a Sri Lankan teledrama actress and second wife of Dilshan. Both Dilshan and Manjula carry a very emotional relation as she was seen crying when he announced his retirement from Test cricket in 2013.

Tillakaratne Dilshan tied the nuptial knot with Manjula Thilini in 2008 during the first edition of Indian Premier League. The above photograph was clicked after ICC Twenty20 World Cup final in 2014. The couple are seen enjoying the moment as Sri Lanka won the tournament by beating neighbours India in the final.

Manjula is a Sri Lankan tele-drama actress and second wife of Dilshan. The couple share a strong emotional bond. Manjula was seen crying when Dilshan announced his retirement from Test cricket in 2013. The couple have two daughters. Dilshan, also has a son from his first marriage.

Dilshan is known as one of the most aggressive batsmen in Sri Lankan cricket. Dilshan perfected the scoop shot and the shot was named Dilscoop. In the year 2009, he bagged the award for Twenty20 performance of the year at International Cricket Council (ICC) awards. He has featured in four World Cup events. 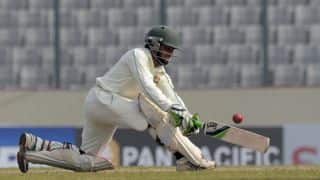