Video: Kenya beat West Indies to pull off one of cricket's greatest upsets

Video: Kenya beat West Indies to pull off one of cricket's greatest upsets

Harper finished with figures of 10-4-15-3. Steve Tikolo, who went on to be Kenya's best batsmen for the next many years to come, top scored with 29 as the African side got folded up for 166.

West Indies had not lost a Test series between 1980 and 1995. The winners of the first and second editions of World Cup cricket and runners-up of the third entered the sixth edition of the tournament as one of the favourites, despite not making it to the semi-final in 1987 and 1992. They had an extremely strong team, featuring Richie Richardson, Brian Lara, Roger Harper, Curtly Ambrose, Courtney Walsh, Ian Bishop and a young Shivnarine Chanderpaul.

This day comes once every four years; on this day, in 1996, West Indies faced newcomers Kenya at Nehru Stadium in Pune. The match garnered little interest as West Indies were expected to steamroll the first timers. Winning the toss, Richardson put Kenya in, and Walsh and Ambrose did what they were good at. The fast bowlers and and off-spinner Harper decimated the Kenya batting. Harper finished with 10-4-15-3. Steve Tikolo, who went on to be Kenya’s best batsmen for the next many years to come, top-scored with 29 as the African side got folded up for 166.

As mentioned by acclaimed journalist Clayton Murzello, it was a game that even journalists did not want to cover. They were already tired after the crucial India-Australia day-and-night game at Mumbai, and had to travel all the way to Pune for this mismatch of a contest. They were glad they did, as they witnessed something unusual.

Kenyan batsman Hitesh Modi later told Mid-Day: “We believed things could change if we got Lara. Our batting was not as good, but our bowling and fielding was. And our team work… brilliant. We had nothing to lose so we gave it our best.”

True to his words, Kenya did exactly that. They had bowled out West Indies for 93. West Indies kept losing wickets at regular intervals and the late Peter Roebuck out it aptly: “The Kenyans bowled and fielded like men possessed, stopping and catching everything, and hardly bowling a bad ball as they played on the nerves of the disintegrating favourites.”

Rajab Ali picked three wickets, including the one of Lara who slashed one hard to the portly, bespectacled wicketkeeper Tariq Iqbal. Aasif Karim later told CricketCountry: “Once we got Brian Lara’s wicket the sense of belief came into the whole team — that something special is going to happen for Kenya and it sure did.”

Skipper Odumbe went on to replicate Harper’s figures. Unforgettable scenes unfolded at Nehru Stadium when Rajab Ali cleaned-up Cameron Cuffy in the 36th over to register an unforgettable win.

Kenya rose in the global cricket map. Most West Indian players including Lara, though gutted, congratulated the Kenyan side. An upset Ambrose later wrote in his autobiography: “I packed my kit and left, saying nothing. No one could explain this result to me in a way that would make any sense.”

The now pundits who had represented West Indies cricket with distinction in 1970s and 1980s were upset and critical. Michael Holding famously said, “I don’t think we can sink lower than this.”

The next day, captain Richardson apologised to the fans: “I would say to the West Indian public that we’re very, very sorry, we’re as disappointed as they are. I’ve never felt this bad in all my life. If things are not going well, somebody should be blamed and the people at the top are usually the ones. I’m the captain, but the players are also responsible, the whole set-up is responsible… we’re in a very, very deep hole and we’re almost at the bottom.”

Most blamed Lara for his casual and flamboyant approach. While West Indian cricketers had to bear the brunt, for Kenya it was their moment under the sun. Kenya, however could not go beyond the group stage while West Indies made it to the semi-final, where they encountered another bizarre defeat against the Australians.

Man of the Match: Maurice Odumbe. 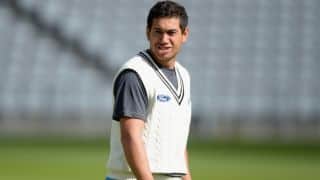