Video: “The most disgusting incident in the history of cricket”

Video: “The most disgusting incident in the history of cricket”

On this day, in 1981, New Zealand and Australia were engrossed in the third final of the Benson and Hedges World Series Cup at MCG.

Yes, you read the headline right. That is how the then New Zealand Prime Minister, Robert Muldoon reacted. He said, “the most disgusting incident I can recall in the history of cricket” and he went on to add, “it was an act of true cowardice and I consider it appropriate that the Australian team were wearing yellow”. In fact, the act was criticised by the Australian Prime Minister. Almost the entire cricket fraternity reacted negatively and why not. Read more: Greg Chappell: 15 little-known anecdotes involving the Australian legend

On this day, in 1981, New Zealand and Australia were engrossed in the third final of the Benson and Hedges World Series Cup at Melbourne Cricket Ground (MCG). It was 1-1 and it had come down to the last ball of the innings. New Zealand needed a six to tie the game. In such situations, you expect a quality side like Australia to win it but it seemed their skipper Greg Chappell did not have the same confidence. Scared of New Zealand’s No.10 batsman Brian McKechnie, he asked his brother Trevor Chappell to bowl a rolling underarm delivery. Here’s what happened next:

Their older brother, Ian Chappell, who was commentating said, “No, Greg, no, you can’t do that.” He later went on to criticise this act in his newspaper column. The legendary Richie Benaud too went on to describe it: “I think it was a disgraceful performance by the captain who got his sums wrong. It should never be permitted again.” He added, “one of the worst things I have seen on a cricket field.”

Ian also famously told, “Fair dinkum, Greg, how much pride do you sacrifice to win $35,000? Because, brother, you sacrificed a lot in front of a huge TV audience and 52,825 people.” “One-Day cricket died yesterday. Greg Chappell should be buried with it,” said Keith Miller.

While the Kiwis have not forgotten it, the Chappells regret the incident. Underarm bowling was banned and over the years it has remained a part of the culture.

24 years since this incident, in the first ever T20I, Glenn McGrath enacted the incident but it was taken in good humour. 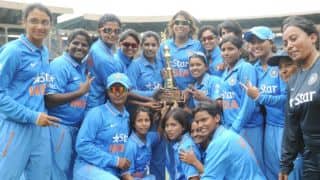