Virender Sehwag and Shikhar Dhawan: Comparative study of the two smiling assassins at a similar stage of their careers

Virender Sehwag and Shikhar Dhawan: Comparative study of the two smiling assassins at a similar stage of t

Dhawan has the aggressive approach of Sehwag, but he needs to replicate his efforts in Test matches.

Both Virender Sehwag and Shikhar Dhawan are are happy-go-lucky Delihites. Both men sport a broad smile at the crease, but are a menace with the bat. Sehwag is one of the greats of the game. Coming-in as a makeshift opener, he went on to define that slot. He is the only Indian triple-centurion in Test cricket. In fact, he has the rare distinction of being one of the four players who has two scores of excess in 300; the other three being Don Bradman, Brian Lara and Chris Gayle. Unlike Sehwag, Dhawan began his career as an opener. He went on to be a household name when he replaced Sehwag in the Mohali Test against Australia in 2013 and smacked an attractive 187 on debut. Back in 2001, Sehwag too scored a hundred on Test debut against a very formidable South African bowling attack at Bloemfontein.

However, unlike Sehwag, his long-time Delhi teammate Dhawan has been more successful in the One-Day International (ODI) format and has emerged as one of India’s leading batsmen. He was the highest run-getter for India in the World Cup 2015 hosted in Australia and New Zealand, where he scored 412 runs at 51.5 and smacked two hundreds. He was also India’s highest run-getter in the Champions Trophy 2013 in England. India won the tournament and Dhawan with 363 runs at 90.75 was adjudged the player of the series.

On Wednesday, Dhawan smacked an unbeaten 150 on the opening day against Bangladesh. Only 56 overs were bowled as rains curtailed the opening session, else he may well have achieve the rare feat of hundred before lunch on Day One of a Test. He ended the day unbeaten on 150; his 158-ball innings laced with 21 boundaries. Dhawan, like Sehwag, scores runs at a very fast pace which gives bowlers ample time to scalp 20 wickets.

Dhawan has the aggressive approach of Sehwag, but he needs to replicate his efforts in Test matches on the flat tracks of sub-continent on overseas tracks before he can get the kind of respect Sehwag got from bowlers all over the world. Rahul Dravid: The stint with Rajasthan Royals as mentor will definitely help me 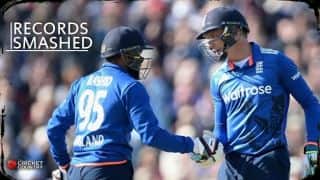