South Africa are a cricketing giant, while neighbours Zimbabwe have been in the wilderness trying hard to shed off the minnow tag by providing glimpses of occasional brilliance.

It’s a pity that Neil Johnson’s international career spanned less than two years as he had the potential to have a glittering career. In a short span he made good impact and on his day he could win his side games with either bat or bowl. In the 1999 World Cup match against South Africa, a country where he spent his boyhood, he chose to excel in both disciplines.

South Africa are a cricketing giant, while neighbours Zimbabwe have been in the wilderness trying hard to shed off the minnow tag by providing glimpses of occasional brilliance. In the World Cup 1999, South Africa were the side to beat and looked as if they could do nothing wrong with their campaign finally ended with the ill-fated tie against Australia in the semi-final. They began their campaign with three comprehensive wins over India, England and Kenya, and looked set to steamroll Zimbabwe.

On this day, 16 years back, Zimbabwe beat South Africa for the first time in international cricket. Batting first against the potent Proteas bowling attack at Chelmsford, Zimbabwe put up 233 on the board in their 50 overs with Johnson top-scoring with 76. South Africa were bundled out 185 courtesy inspiring spells from Johnson and Heath Streak. Johnson picked up the key wickets of Gary Kirsten, Jacques Kallis and skipper Hansie Cronje. Streak too chipped in with three wickets. In the above image, an ecstatic Johnson is seen celebrating a wicket. Zimbabwe’s win over India and then South Africa helped them carry crucial points to the Super Six stage but they still couldn’t make it to the semis.

So far, both neighbours have played 49 international cricket matches (Test, ODIs and T20 combined) against each other and Zimbabwe have only won two. This win was surely a special one. 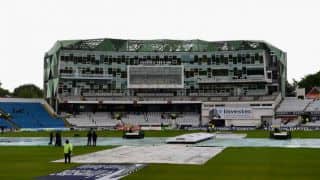