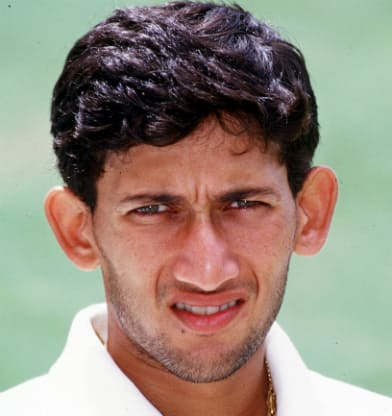 Ajit Agarkar is some sort of an enigma. When John Wright first saw him in the nets, he mistook him for a frontline batsman. That was because he possessed a gift of timing many top order batsmen would be envious of. And in some incredible innings that did bear fruit. He scored that magnificent Test hundred at Lord’s and a 21-ball fifty against Zimbabwe in Rajkot, still the fastest fifty in ODIs by an Indian. However, in between there were batting disasters that branded him as the Bombay duck, when he could not get a run in Australia.

But Agarkar was primarily a medium-pacer, and raced to 50 wickets in 23 ODIs, a record that stood until Ajantha Mendis bettered it in 2009. The heady mix prompted fancies of another Kapil Dev, but sadly that never materialised.

He did win a Test in Adelaide with 6 second-innings wickets, but that was an aberration. His Test wickets came at high cost, ending with a bowling average of 47. As an all-rounder he never really had a good time with both bat and ball in the same Test, and did so only once in ODIs with 67 not out and 3 for 26 at Rajkot against Zimbabwe.

Never quite a regular in the Test side, he did play 191 ODIs, where his batting strike rate of 80, bowling average of 27 and fast movements in the field did make him more than a useful contributor. But he never quite managed to reach even the foothills of the peaks traversed by Kapil.

In domestic cricket he remained a formidable all-rounder, and his 5 for 81 in the heart-stopping Ranji final of 2009-10 against Karnataka remains one of the most memorable performances. In his last season, 2012-13, he captained Mumbai to another Ranji Trophy triumph, scoring a career-best 145 in the semi-final against Services.